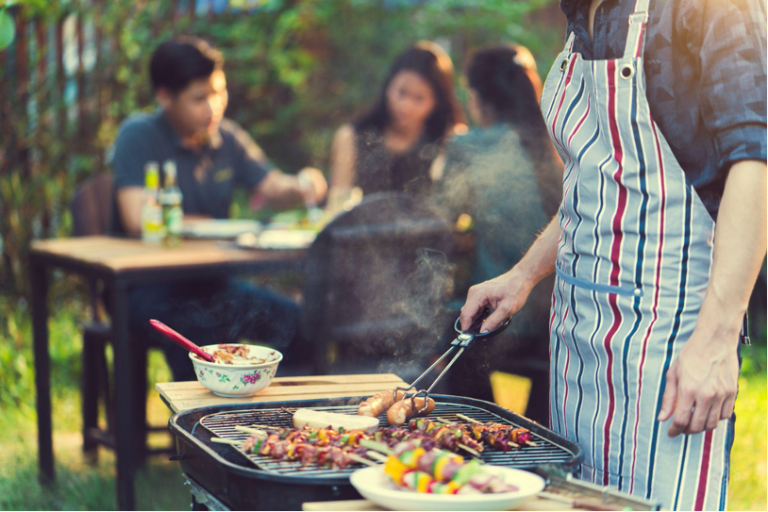 How Grilling Tech Has Advanced Over Time

When you fire up the grill, do you ever think about the long and proud tradition you’re taking part in? Sure, you might remember your family members grilling when you were a kid, but it goes back much farther than that. Way back, in fact, to the very beginnings of human civilization!

With a history of grilling going hundreds of thousands of years strong, it’s no surprise that today’s humans still love to grill. But the story of the grill is full of fascinating turning points where we discovered ways to refine this force of nature into something even more delicious. From early human cookfires to modern-day innovations like WiFi pellet grills, come with us on this tour of grilling technology through the years. 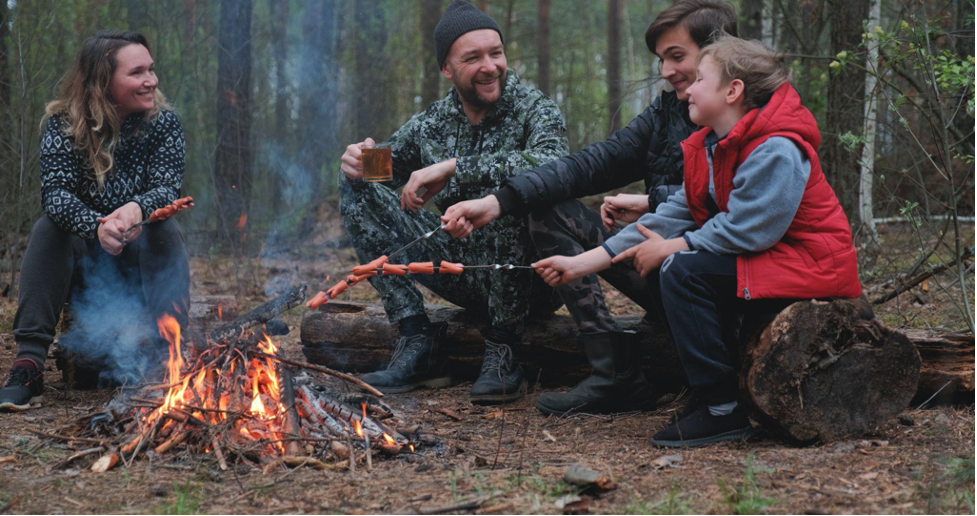 Depending on who you ask, humans might have started controlling fire as far back as a million years ago. These early fires weren’t exactly sophisticated, but they got the job done when it came to cooking food. In fact, a lot of scientists argue that cooking was one of the major technological advances that allowed humanity as we know it to develop.

In many cultures, the production of charcoal also started many thousands of years ago. Humans figured out that partially-burned wood would burn much hotter and cleaner than raw wood, which made it great for fires.

However, cooking fuel wasn’t originally the primary use of charcoal in many cultures. Instead, people mostly used it to create the blazing-hot fires needed for metalworking, an equally important development in human history. It wasn’t until much later that most of us figured out how good it made a burger taste!

Grilling Through the Years

Cooking over a wood or charcoal fire has been a common method of preparing food throughout pretty much all of human history. From the tandoor ovens of India to the kamado grills of East Asia to the all-American BBQ pit, grilling is a huge part of the culinary heritage of many different cultures around the world.

Low-temperature smoking has also played a significant role in human civilization. Many cultures have used smoking to preserve food so it stays edible for a long journey. In other cuisines, like southern BBQ, smoking started so that poorer people could turn a cheap, tough cut like brisket into something tender and tasty.

Many elements of today’s grilling and barbecuing came from the Taíno Native Americans of the Caribbean. One of their main cooking methods, known as barabicu, involved cooking meat on a framework of sticks built over a fire. Spanish colonizers of the 15th and 16th centuries loved the flavorful results of barabicu and spread their own versions of the cooking method across Europe and North America. There, it became known as barbacoa and, eventually, barbecue.

Finally, one more key innovation happened near the end of the 1800s. A Pennsylvania man by the awesome name of Ellsworth Zwoyer created a new form of charcoal called the briquette, small lumps of fuel that were easy to mass-produce from commercial wood by-products like sawdust. Briquettes were so successful that Henry Ford himself jumped into the market, and soon, charcoal was finally ready for its time to shine.

The Grill As We Know It

Charcoal grills were in widespread use across the U.S. by the early 20th century, thanks to the invention of briquettes. But they didn’t cross over into the home market much until mid century. It was much more common to see people grilling in a park or on a camping trip.

Backyard grilling as we know it first became popular in the postwar prosperity of the late 1940s and ’50s. With suburban backyards increasingly becoming social focal points, it was only a matter of time before charcoal grill models designed for the patio started gaining popularity.

Soon, the popularity of grilling led to the development of the modern charcoal grill, with a hooded design and built-in dampers to control ventilation and air flow. These new grills made it much easier to light a fire and tame flare-ups, and they prevented ash and embers from flying everywhere in a breeze. Most charcoal grills today still use a similar basic blueprint.

The 1960s saw the invention of propane gas grills, which became a near-instant hit thanks to their ease of operation and consistent cooking heat. Suddenly, charcoal wasn’t the only game in town, and gas grills owned a significant share of the grilling market within a few years. 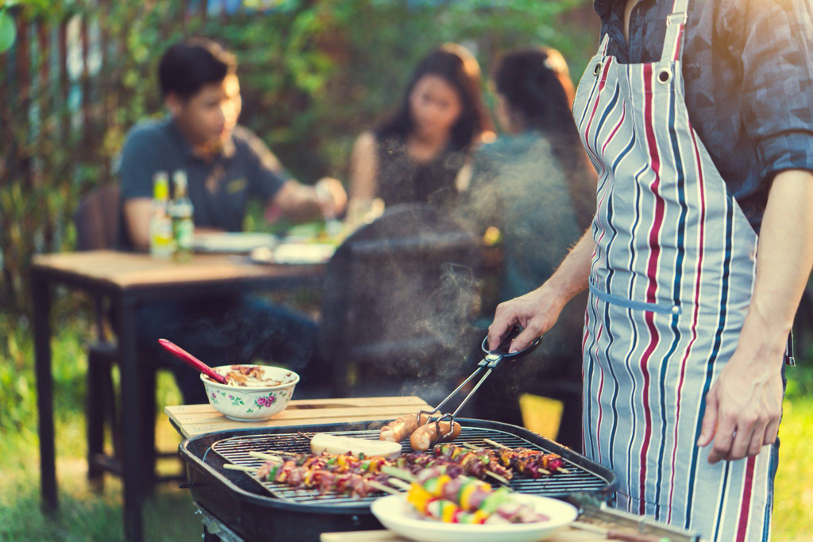 Grills of Today and Tomorrow

Grilling is as popular as it’s ever been in the U.S., especially with people looking for pandemic-friendly ways to get outside with friends and family. Gas grills and charcoal grills are still the two most common grill types, with gas keeping a slight edge over charcoal. Some charcoal lovers have embraced kamado grills, a revival of the ancient East Asian charcoal grill design with a ceramic lining that provides incredible heat retention.

However, newer grill types like pellet grills are also getting today’s grillmasters fired up. A pellet grill burns compressed pellets of hardwood at a set rate, controlled automatically by internal electronics. Its “best of both worlds” approach combines the satisfying flavor of wood cooking with the flexibility and user-friendliness of a modern cooking appliance.

Backyard smoking is also hotter than ever in the 21st century. This low-and-slow cooking method is perfect for succulent BBQ dishes like ribs, pulled pork and brisket. As backyard pitmasters have built a community of devoted BBQ smokers, smoking technologies such as pellet smokers are quickly establishing a place in the market, too.

Smart grills are one of the next big frontiers of grilling tech. These grills are built for easy remote control through WiFi or Bluetooth, so grill owners can monitor and control their grill temperatures from anywhere! This technology is especially well-suited for pellet grills and smokers, which already use electronic systems to regulate fuel flow and temperature. 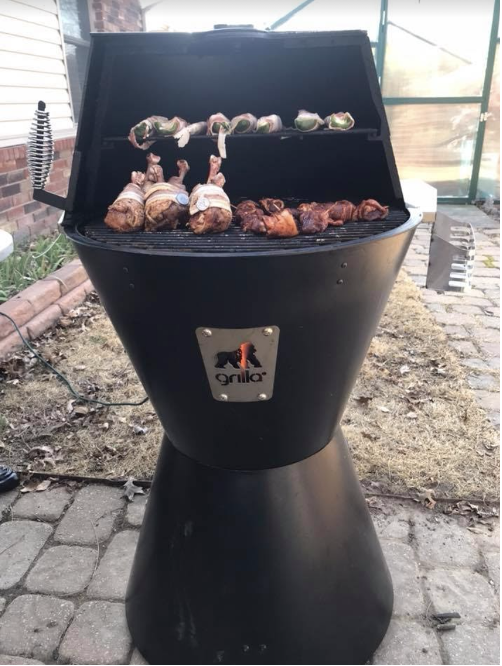 What will grilling look like another 100 years from now? What about another 500? It’s just about impossible to predict, but one thing is nearly for sure: Its results will be delicious.