The truth about household debt in the UK

Home Decor Expert·26 April 2016
householdsponsored
The headlines are lurid and alarming: ‘Is the UK facing a debt disaster?’, ‘Household debt at highest for five years’, ‘Economy concerns as household debt rises to £40bn’. 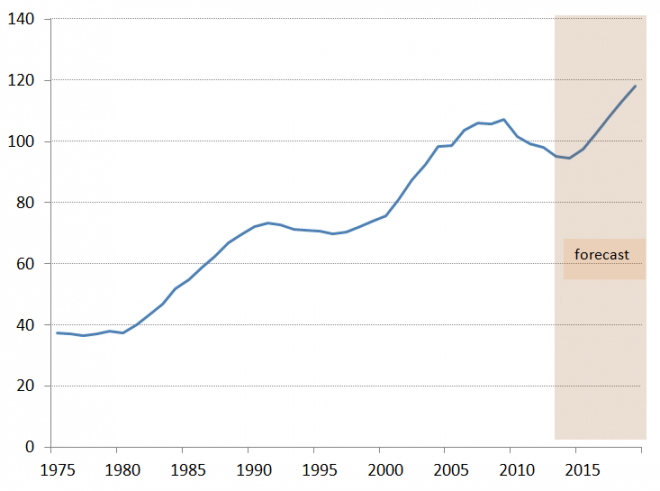 The message is clear: The UK is in the grip of an unsustainable boom based on debt and credit and a new financial crash, driven by Britons’ insatiable appetite for debt, is just around the corner.

According to the latest figures the average Briton owes more than £10,000 on loans, bank overdrafts, credit cards and other forms of unsecured credit. That figure does not take into account secured forms of lending – like mortgages and homeowner loans. The average British household owes a total of £56,000 (both secured and unsecured).

Britain’s debt story is not unlike that of virtually every western nation. Household debt, which fell in the years immediately after the financial crisis on 2008/9 when many concentrated on cutting back and repaying debt, has been growing every year since 2012.

Britain not facing debt meltdown
But the apocalyptic predictions of the headline writers are simply not reflected in the assessments of those responsible for monitoring the situation. While households have increased their amount of debt, the data simply does not back up claims that Britain is on the edge of some kind of debt meltdown. Household consumption has been growing more slowly since the recovery started and the total appetite for debt has actually fallen. Britain’s families have only increased their total outstanding debt by an average of £5.1 billion every quarter since 2009. That figure is four times lower than the rate between 1997 and 2009 when households added an average of £22 billion of borrowing every quarter.

The areas of borrowing that have caused concern are buy-to-let mortgages and an explosion of car finance deals. These have been increasing at at nearly 10 per cent every year since 2009 but economists point out that these represent small parts of the total UK credit market. With the buy-to-let market now cooling off, analysts expect this area of the mortgage market to start slowing down, too.

Many analysts believe that the myth about unsustainable debt is simply hysteria, which is hiding the true picture. They say that with official figures showing that, after deducting debt, net household assets were 7.67 times average income in 2014. This represents the strongest picture of household finance than at any time in the preceding century.

Debt growing in line with economy
Household debt grew at an average of 7 per cent annually in the years prior to the financial crisis. This represented twice the rate of growth in the UK economy, something we are still a long way away from. Debt is currently growing at a rate broadly in line with GDP growth.
The distribution of debt is also a cause of optimism, economists believe. In the UK – in contrast to the United States – the highest proportion of debt is actually carried by the wealthiest households, not the poorest. This has not changed over the last 10 years and shows that the British do not have a sub-prime mortgage problem in the way that the US does.

While it is a common belief that the banking crash was caused by debt, this is a myth. Household assets are growing in value more rapidly than household debt meaning that the vast majority of Britain’s families can afford to service existing and forecast levels of debt.

The governor of the Bank of England, Mark Carney, said earlier this year that household debt had fallen significantly following the financial crisis but said that it could still pose an “indirect” threat to the economy.

Speaking at a panel in France in January, Mr Carney said: ”This is not a debt-fuelled recovery.

“Of course, that could change and debt is still relatively high for the household sector,” he said. “Vigilance is required – it is always required.”

The amount of UK household debt is expected to rise every year until 2019 when, the Office for Budget Responsibility says, it will reach 171 per cent of gross domestic products (GDP). It is currently 146 per cent.

Mr Carney said that the speed of the recovery since the crash of 2008/9 meant that many people felt more confident to borrow money. The rise in unsecured credit was, he said, primarily driven by sales of new cars. He added: “We’ve moved from post-crisis risk aversion to a more normal environment. Consumer credit has been picking up.”

The governor said that he and other policymakers continued to be “vigilant” about the risks that debt poses to the economy and are ready to take action if there was evidence that the level of debt was becoming unsustainable.

Speaking to an audience in London in February, Mr Carney said: “Given the vulnerability that already exists and the powerful drivers in the UK, particularly the housing market, if credit began again to grow faster than GDP, I would want to think about action to manage the financial stability risks sooner rather than later.”

The Financial Policy Committee, the group charged by the government with the UK’ financial stability, has already taken steps to slow mortgage lending down and is likely to be given powers to curb the buy-to-let property market.

Article provided to Home Décor Expert by Mike James, an independent content writer working together with technology-led finance broker Solution Loans, who were consulted over the information in this post.